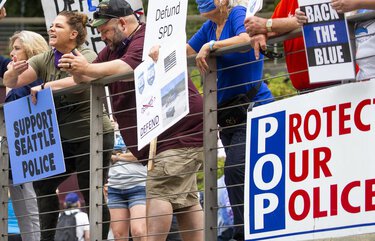 An ongoing debate about whether to “defund” the Seattle Police Department by redirecting much of its budget to social services and community-based solutions played out Saturday morning in City Hall’s front plaza as opponents rallied against the idea and proponents also made their voices heard.

Moments after a “Defend not Defund” rally began with 100 to 200 people in attendance, a counterprotester stationed in the crowd began playing the Rev. Dr. Martin Luther King Jr.’s “I Have a Dream” speech loudly out of a large speaker.

In response, some “defend” demonstrators pressed around the counterprotester with signs and many in the crowd chanted “USA, USA,” almost drowning out the civil rights leader’s speech.

Police officers spoke with the counterprotester and then escorted the person to the corner of the block, outside metal barricades. Some in the crowd jeered. As the rally resumed, officers blocked a few dozen “defund” protesters while allowing people who said they were “defend” rally participants to walk past the barricades. Demonstrators traded sharp words over the barricades.

Lt. Truong Nguyen, a Police Department supervisor there, said the officers were handling the event that way because the rally had a permit. “We don’t want (to have the two sides) clash,” Nguyen said.

Jana Downing, a Queen Anne resident who helped organize the “defend” rally, said it was “in bad taste” for someone to “disrupt in that way,” while counterprotesters shook their heads at the scene.

“We are allowed to be here. Are we not Americans?” said a “defund” proponent named Nait who’s taken part in some much larger Black Lives Matter demonstrations since May, trying to describe to officers how the criminal justice system hurts people.

Downing said she organized the rally with Beth Daranciang, a Republican candidate for the state House, because she believes good cops are being unfairly maligned and because she worries Seattle would be less safe were the Police Department’s budget to be slashed.

Participants at the rally waved U.S. flags and Blue Lives Matter flags. They held signs with slogans like “Defund the City Council,” “Back the Blue” and “Reform not Defund.” Some wore Donald Trump apparel. Some chanted “All Lives Matter.” Caleb Heimlich, the state GOP chairman, spoke briefly. Firetrucks drove by on Fourth Avenue, with firefighters showing support for the rally.

“Welcome to the rally where the silent majority gets loud,” Daranciang told the crowd, drawing cheers.

Mary Brancato, an Edmonds resident, said she attended because “99% of the police officers in this country are not racist” and because she believes community-based approaches are inadequate and “would be a disaster.”

Standing outside the barricade, counterprotester Toni Mills said she knows through personal experience that police officers don’t protect everyone.

“The police don’t make me feel safe at all,” Mills said, mentioning prior encounters and brutality at recent protests and suggesting police dollars would be better used to help people. “Homelessness is our biggest problem.”

“You aren’t born blue. You choose to be an officer” in a racist institution, Gean said, mentioning the many unarmed Black people killed by police. “You don’t choose to be Black, or gay, or a woman.”

Abdul Kareem, a Shoreline resident who happened to walk by, said the Police Department budget should be cut by as much as 25%, though not dismantled. “They have too much money,” he said.

At least one person was arrested at the rally; it wasn’t immediately clear why.

Correction: An earlier version of this story incorrectly described Beth Daranciang as a candidate for the state Senate, rather than the state House.