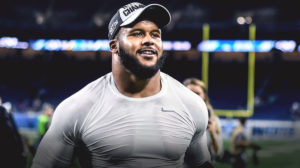 The Seattle Seahawks, similar to the other 31 teams in the NFL, have brought in some celebrities to speak to the team in their virtual meetings. While the Seahawks attempt to maintain some normalcy, cornerback Quandre Diggs has been surprised at the celebrity cameos on Seattle’s Zoom calls.

Quandre Diggs says he’s met more people/celebrities through Pete Carroll’s team meetings, Zoom calls since joining #Seahawks in October than he’d met in his entire career before this. Steve Kerr the latest, after Will Ferrell pic.twitter.com/15wxndxC2j

Diggs is entering his first full offseason with the Seahawks after being traded to Seattle last season. Prior to arriving in Seattle, Diggs spent the first four years of his career with the Detroit Lions.

Given that, playing for the Seahawks was definitely a culture change for the former sixth-round pick. While in Detroit, Diggs never got a chance to suit up in the playoffs, for example.

But in Seattle, despite playing in just five games, Diggs was able to make his playoff debut last season. In his five starts with the Seahawks, Diggs contributed 21 tackles, three pass breakups and three interceptions. The Texas native would also tack on a pick-six on one of those takeaways and a forced fumble as well.

Following a shortened year with the Seahawks, Diggs has a chance to get even more acclimated to Seattle this offseason. Although the coronavirus pandemic has complicated things, the Seahawks have tried to make sure their players are upbeat.

As a result, Seattle has had multiple celebrities — including Will Ferrell and Steve Kerr — speak to the team via Zoom. The team’s efforts to reach out to these celebrities have definitely caught the attention of Diggs.

With months to go until training camp, the Seahawks may have a few more celebrities up their sleeve to surprise Diggs even further.