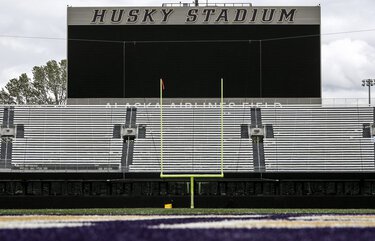 The Washington Huskies will play football this fall.

If they do, Jimmy Lake will (tentatively) make his head-coaching debut against Stanford inside Husky Stadium on Sept. 26. The Pac-12 Conference officially unveiled its revamped 10-game, conference-only schedules Friday, after receiving approval from the conference’s presidents and chancellors.

The Pac-12 CEO Group also approved conference-only scheduling plans for men’s and women’s soccer, women’s volleyball and men’s and women’s cross country, with competition set to start no earlier than the weekend of Sept. 26. The first permissible practice date for Olympic sports will be Aug. 15.

The only addition is UCLA, which will play inside Husky Stadium on Nov. 21. The Huskies’ nonconference games against Michigan, Sacramento State and Utah State were previously canceled, though UW athletic director Jen Cohen stated this month that efforts are being made to reschedule the Seattle leg of a home-and-home series with the Wolverines.

The updated Pac-12 schedules were “structured to maximize flexibility,” according to a conference release. Each team has the option to delay the beginning of its season by moving the opener to either its bye week or the week following the conclusion of the regular season, Dec. 7-12. Any other game could also be slotted into those windows, should a game need to be rescheduled due to coronavirus concerns.

The Pac-12 championship game has been moved to Dec. 18 or 19, to be played at the home field of the team with the highest seed. The conference’s title game will move to Allegiant Stadium in Las Vegas for a two-year run beginning in 2021.

Of course, the aforementioned conference-only season will not be played inside an organized bubble — unlike current competitions in the NBA, WNBA and MLS. In a media webinar Friday, Pac-12 commissioner Larry Scott said “there is no bubble, and the bubble would not be appropriate for college sports and for our campuses and students. They’re not going to be able to be quarantined or isolated in a bubble the same way pro sports do. We recognize that, and it’s one of the reasons we go into this with a lot of humility, and recognizing we’ve got a plan.

“We’re going to follow medical guidance along the way, but we’re going to have to monitor how things are going. It’s one of the reasons why building in flexibility to the schedule is so important. If there is an outbreak on a team … we’re going in expecting that’s a real possibility. And if that happens, especially with 14-day quarantine periods currently for anyone that’s in close contact, that will require the rescheduling of a game.”

Without any semblance of a bubble, Pac-12 teams will travel for five road games this season — and they may ultimately play in fairly differing conditions. Scott said he doesn’t consider the topic of fan attendance in Pac-12 stadiums to be a conference decision.

“There’s been a lot of collaboration between our schools in sharing their best practices about how they deal with scenarios with limited fans,” he said. “But we really feel it’s appropriate for us to defer to the public health authorities at the state and county level to determine that. We could have differences (in fan attendance) in the conference, but we’re comfortable with that.”

Each of the Pac-12’s football programs could move to 20 hours of mandatory summer activities — meetings, workouts, walk-throughs, etc. — beginning as early as Monday, with training camp starting as early as Aug. 17, “subject to allowance by public health orders and medical advice.” On Friday, a UW spokesperson said it has yet to be determined whether the Huskies will begin mandatory activities Monday.

And the actual start dates for training camp may be equally uncoordinated across the conference.

“Everyone can start as early as Aug. 17, but it’s not my expectation that everyone will start or manage their 25 (practices) the same way,” Scott said. “So there will be some flexibility built in.”

The Pac-12’s announcement comes days after both the ACC and SEC conferences announced their own plans for a fall football season. The ACC’s plan includes 10 conference games and one nonconference opponent for each team, with games beginning the week of Sept. 7-12. The SEC, on the other hand, will kick off a 10-game, conference-only season Sept. 26. The Big 12 Conference began fall practices Friday for a season that could start as early as Aug. 29. The Big Ten has yet to announce an updated schedule.

It’s possible, of course, that all these endless revisions will be fruitless; that the pandemic will puncture any best-laid plans. Scott acknowledged that teams could ultimately play less than 10 games this fall, or that competition could be suspended yet again. He was asked flatly for his level of confidence that college football will be played.

“I’ll approach the answer to that question with a lot of humility, and … I don’t know,” he said. “I think we are all trying to take a step at a time. We are cautiously optimistic, sitting here today. But there are elements outside our control that are going to have a lot of influence on that question.

To this point, the Pac-12 has a working schedule, limited answers, lots of questions … and just as many contingency plans.

“We intend to start on Sept. 26,” Scott said. “But we will be ready — as we’ve been all along, like how we’ve already moved from Plan A to Plan B — to move to C, D and E, if necessary. We owe that to our student-athletes.”

Added Cohen in a statement: “Today’s conference-only football schedule release and fall Olympic sport update from the Pac-12 are another positive step forward as we continue to put plans together for competition this fall. We believe a delayed start to the season gives us the best opportunity to play this fall and recognize these models are contingent upon approval from public health officials and our medical teams.

“We are grateful to the Pac-12 Medical Advisory
Committee, along with the Pac-12 CEOs for their diligent and detailed work that
has kept the health and safety of our student-athletes, coaches, staff and fans
as the top priority. We acknowledge we still have many challenges and unknowns
ahead, but will continue to make decisions that reflect these priorities.

“Husky Nation has been absolutely incredible during this entire process, and we are so grateful for their unwavering support. We will continue to provide updates on the fall as they become available.”